Product manufacturers are a for-profit business. Unfortunately, in the last decade, we have seen these companies put profits before people, and Bayer is no exception. In June 2016, federal lawmakers introduced a bill in the U.S. House of Representatives called “Ariel Grace’s Law” to help consumers fight for their right to file lawsuits against Bayer for the permanent birth control device called Essure. This bill was later reintroduced on 4/26/2017 as the Medical Device Safety Act 2017 to encompass all Class III medical devices. The bill was introduced by Rep. Brian Fitzpatrick (R-PA) and has been co-sponsored by Rep. Louise Salaughter (D-NY)(deceased), Rep. Rosa DeLauro (D-CT), Rep. Jan Schakowsky (D-IL) and Rep. Peter DeFazio (D-OR).

Essure consists of a four-centimeter coil placed into each fallopian tube to prevent pregnancy by causing severe inflammation creating a total blockage of the fallopian tubes. The coil contains nickel, which some women are unknowingly highly allergic. The coil also contains polyethylene (PET) fibers, which irritate and inflame the tubes, causing scar tissue to form over the coils, blocking subsequent fertilization.

Unfortunately the PET fibers, which create the irritation to form the scar tissue, often cause the body to fight what it deems to be an infection or foreign body, creating a host of other problems from autoimmune disorders, neurological problems, kidney, adrenal and thyroid disorders and even cancer. The coils often become dislodged, perforating the fallopian tubes, uterus, colon or other internal organs.

Hemorrhaging and damage to fetus among risks for Essure users

There are many painful side effects associated with the Essure device. Some of the more common complaints are:

Let one of our attorneys provide you with answers

All the potential damages to the fetus of women who become pregnant while on Essure has not been determined.  As of June 13, 2018, there have been approximately 29,000 complaints or adverse event reports forwarded to the FDA regarding Essure-related problems. These complaints increase daily as the device continues to be implanted in the United States despite having been withdrawn in all other countries worldwide.

The manufacturer has been accused of providing fraudulent data to the FDA during the premarket approval of Essure, which resulted in the device being approved and granted protected status from most litigation. The Medical Device Safety Act is one proposed measure in congress that would allow women injured by the Essure device to seek compensation and redress for their injuries.

What started out as an exciting new contraceptive device for women has morphed into a legal battleground and a grassroots social movement phenomena. Similar to the #metoo and #timesup movements,  #EssureProblems has gained worldwide support and recognition and has grown to 37,000 members.  Essure has been the subject of various legal and legislative battles since its inception in 2002:

2002-Essure was approved by the FDA on November 4, 2002. The product was originally manufactured and marketed by Conceptus, however, Bayer acquired Conceptus on June 5, 2013.

2011-Angie Firmalino, frustrated by the injuries she suffered from the device creates  the "Essure Problems" Facebook page.

2011-2015-Essure Adverse Event reports are quietly piling up within the FDA. Women are connecting the dots between their physical symptoms and injuries and the controversial device.

10/10/2013-Consumer Advocate Erin Brockovich enters the fight against Essure and begins working with the Essure Problems Group to have Essure removed from the market.

4/21/2014-A new Study published in the journal, Contraception, claims that women are more likely to become pregnant after being implanted with Essure than with traditional tubal ligation.

2/20/2015-A Citizen's Petition is filed with the FDA claiming the Essure PMA should be revoked as the expedited pre-market approval process was "replete with fraud", including the altering of clinical trial participants' medical records.

4/24/2015-The Five-year post market study required under the 2002 PMA approval is finally published.

6/24/2015-The FDA reports that it has received over 5,000 complaints regarding Essure and after much prompting by the Essure Problems Group, agrees to hold a public hearing on September 24, 2015 to evaluate the overall safety and effectiveness of Essure.

9/24/2015-The FDA held a day long hearing before a panel of experts who heard patient and expert testimony regarding the safety and efficacy of the Essure device. The panel criticized the manufacturer for not collecting enough data regarding the device and the manner in which the clinical trials were conducted. It concluded that more information was needed regarding the safety of the device, but did not recommend removing it from the market.

10/08/2015-A New England Journal of Medicine article sharply criticized the clinical trials and pre-market studies regarding the Essure device, noting that, "Although Essure is designed to remain in place for a woman's lifetime, few women in the premarketing studies were followed for more than 1 year — a limitation that precludes conclusions about longer-term risks."

10/13/2015-A British Medical Journal Study reports that women implanted with Essure were 10 times more likely to require post-procedure surgery than women who underwent laparoscopic sterilization, noting that 2.4% of Essure patients required follow-up surgery one year after the initial procedure.

11/04/2015-Congressman Mike Fitzpatrick (R-PA) introduces the E-Free Act, which would require the FDA to remove Essure from the market no longer than 60 days after the bill is passed.

2016-Lawsuits are filled against Bayer regarding Essure in several states including Pennsylvania, California, Missouri, Illinois and New Mexico.

2/29/2016-The FDA orders Bayer to conduct another post-market study regarding the risks and benefits of Essure and will require a "black box" warning to be implemented as well as a patient decision checklist to be signed by doctors and patients before the device is to be implemented. However, the checklist is a "guidance" and the FDA has no method for enforcement by physicians.

6/30/2016-Health Canada issues warnings regarding the risks of serious complications from Essure and will be actively monitoring women implanted with the device. Health Canada is working with Bayer to create a black box warning and a patient decision checklist, which is intended to be reviewed and signed by the patient prior to be implanted.

11/15/2016-Essure 'black box' warning and patient decision checklist become effective and physicians are sent a 'Dear Doctor' letter regarding both.

2/17/2017-Brazil's health agency announces that Essure sales would be discontinued.

5/6/2017-Essure Problems Group holds national rallies in cities across America, demanding Essure be pulled from the market worldwide. A major rally occurred at the ACOG convention in San Diego.

6/19/2017-Bayer announces it will gradually cease sales of Essure throughout Canada due to a decrease in demand.

6/25/2017-Claiming decreased demand and sales, Bayer announces it will cease selling Essure in Finland and the Netherlands.

8/02/2017-The Patient-Centered Outcomes Research Institute (PCORI) board approves a "Real World Effectiveness and Safety" study of Essure vs. laparoscopic sterilization. This purports to be a non-biased study involving the two sterilization procedures.

8/30/2017- The Australian Medical and Science Ltd. (AMSL) issues a "hazard alert" for Essure and recalled all unused stock while also pulling the device from the market.

9/01/2017-Bayer announces that Essure will no longer be sold anywhere in the United Kingdom.

9/02/2017-The FDA approves Bayer's updated post-market surveillance study regarding Essure. The study will examine two groups of  1,400 women between the ages of 21 and 45 who undergo either laparoscopic tubal sterilization or the Essure device. The final study is scheduled to be released in 2023.  Meanwhile Essure remains on the market and women continue to be implanted with the device during the pendency of the study.

9/18/2017-Bayer announces it it will stop selling Essure throughout the world with the exception of the United States, where it will remain on the marketplace.

9/25/2017-The Essure Problems group held a rally in support of the Medical Device Safety Act 2017.  The group transitioned to a well-attended press conference presented by several of the co-sponsors of MDSA 2017.

10/25/2017-Bayer releases it 3rd. Quarter Report which announces that there have been 10,600 Essure lawsuits filed against Bayer in the United States.

12/07/2017-Congresswomen Rosa DeLauro, Louise Slaughter and Jan Schakowsky meet with FDA Commissioner Scott Gottlieb and other FDA officials. However, Essure Problems Group representatives are disinvited. The FDA claims it would be a conflict of interests to meet with the Congresswomen and members of the public effected by the device, stating there was, "a long-standing FDA policy that constituents cannot meet with Representatives at the same time."

2/7/2018-Administrators of the Essure Problems Facebook Group, attorney Holly Ennis and Device Events CEO, Madris Tomes, meet with FDA Commissioner, Scott Gottlieb to discuss why Essure should be pulled from the market and why the Black Box Warning and Patient Decision Checklist are ineffective.

4/9/2018-FDA issues an order restricting the sale and distribution of the Essure device to ONLY healthcare providers and facilities who provide the mandated information to patients regarding the risks and benefits of the device, "in the form and manner specified in approved labeling." The statments must be signed by both patient and physician.

4/21/2018-The Administrators of the Essure Problems Facebook Group and attorney Holly Ennis attend the  Tribecca film festival premiere of The Bleeding Edge documentary exposing the lives effected by dangerous medical devices, including Essure.

7/27/2018-The Bleeding Edge documentary regarding the dark side of the $400 billion medical device industry and it effects on patients, including those harmed by Essure will be released world-wide on Netflix.

Although many Essure battles have been successful, the most important battles lie ahead. It is imperative that the FDA revoke the PMA for Essure and remove it from the market. Equally important is that the current litigation proceed swiftly and judiciously and provide the thousands of ladies injured the compensation they deserve. Justice delayed is justice denied.

Ennis & Ennis P.A. was among the first law firms standing up for Essure injury victims across the country. Our attorneys work with clients to guide them through the physical, mental and financial anguish caused by these dangerous devices. Ennis & Ennis P.A. has filed lawsuits for Essure victims nationwide, in the state of California, Missouri, New Mexico and Illinois with more to follow. 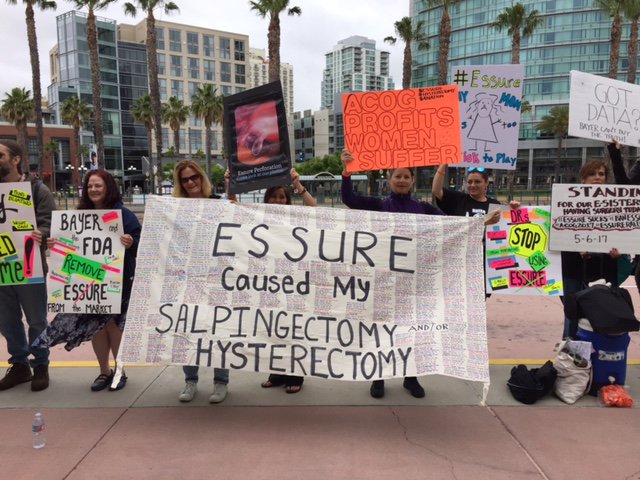 If you or a loved one suffered injuries from an Essure device, you may be eligible to receive compensation for medical expenses, lost wages, pain and suffering and other damages. Contact one of Ennis & Ennis’ female Essure attorneys for a free case evaluation by calling one of our offices or by filling out the Essure lawsuit case evaluation form on this page.